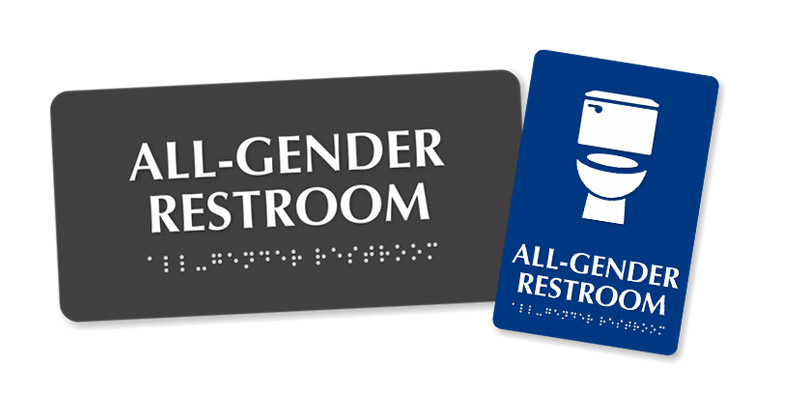 31 May All Gender Bathrooms

Creating more gender neutral bathrooms would be extremely beneficial to queer students at Vashon Island High School, and the community as a whole. Setting the precedent for an open and accepting community like ours is not only a good example, but will also help community members. It would create a safe and comfortable place for transgender and non-binary students to use the bathroom without feeling singled out. There is an understandable amount of concern about the implementation of gender neutral bathrooms, but that lies in mindset rather than in reality. Gender neutral bathrooms have been created in several schools in the Seattle area, and have shown great success. Especially in our current political climate, it is important to make sure all people feel safe and comfortable. Our school can do this and be a good example to other schools and public spaces

In stopping the gendering of a set of school bathrooms, we aim to support and protect the gender expansive and queer students who are often ignored. This measure is to make students feel more comfortable, create a more inclusive school, and support a population that is often under attack, while preventing congested bathrooms. Students who identify as transgender, non-binary, and/or queer who want to be able to safely use the bathroom are forced to walk to what is often the other side of the school and use a key to access this bathroom. This not only feels very othering, but students also feel like they have to out themselves to get a key in the first place. Vashon Island High School has a mission statement that includes “equipping every student to engage, thrive, and contribute within an ever-changing world,” and we need to follow this more than ever. To be able to thrive, students need to feel safe and accepted, and contributions can only occur if someone is comfortable enough to be able to help.

Currently, transgender students are under attack. They have just lost federal protection to use the bathroom they identify with, and while transgender kids in Washington are safe, it still hurts to know that there are people in the government who actively make efforts to alienate them. While being allowed to use the bathroom of your choice is protected in several states, many transgender people and students still put themselves at risk for harassment when they use either of the bathrooms. This is the changing world we are experiencing, and we need to move with it.

There is an understandable amount of opposition to this idea of non-gendered bathrooms. This is something that is very new, especially in our area. One important thing that we want to address and make clear is that these bathrooms would not be “special” bathrooms, only available to transgender or nonbinary students, but bathrooms for anyone who wants to use them. This is part of why we want to only change one section of bathrooms at the high school instead of all of them. We understand how sharing the bathroom with people of other genders can be intimidating, and we want to make sure that everyone can feel safe and comfortable. Transgendered students are often forced to use bathrooms that they might not be comfortable in, so we want to make sure that this does not happen with any other students. There is also the serious and continuing concern of an increase in sexual assault that could result from the desegregation of bathrooms. However, in all states and municipalities that protect transgender individuals under nondiscrimination laws, there has been no increase in sexual assault or harassment by transgender persons(ABC News). That being said, transgender people are often the victims of abuse and attacks when using a bathroom that the people around them deem as wrong. Another issue that we have identified is that the people using the bathrooms have different genitals. The use of urinals adds to the fact that there might be accidental exposure. To deal with this, we would like to propose adding a divider between the urinals, and putting a sign outside the door that states that the bathroom has urinals, or taking the urinals out of service. In addition to this, intersex people have existed forever, but we never seem to consider what their experience is like (intersex is a general term used for a variety of conditions in which a person is born with a reproductive or sexual anatomy that doesn’t seem to fit the typical definitions of female or male). We have also identified that parents might be apprehensive of this change. In response, we want to start with educating everyone on what it means to have a section of gender neutral bathrooms. We also want to reiterate that our plan is only to change one set of bathrooms in an effort to support the students in this school who currently feel like outcasts.

Changing a multi-stalled bathroom within a school has been done before in the Seattle area. Last year in May, Nathan Hale High School converted a bathroom to be gender neutral; Since then, they have had no issues related to sexual harassment as a result of these bathrooms. There are similar situations in West Seattle High School and the University of Washington.

It is important that our school takes small steps in the implementation of a gender neutral bathroom system. We have proposed a three-week trial period, using a pair of the current gendered bathrooms, to test how this system would work in our school. Simply labeling which bathrooms have urinals and which have stalls would give students a warning before walking in. Before we start this trial period, it is especially important to educate the student body on the reasoning behind and the nature of gender neutral bathrooms for all. This could be done through an announcement, an email, an assembly, or an article in the school’s newspaper. We also want to make sure that there are clear expectations surrounding behavior within the bathrooms. Anyone who misuses or abuses the space or students within it, should be penalized and the situation should be dealt with promptly. We want to make it clear that situations that may arise are not ignored.

Our current system penalizes transgender and non-binary students for the possible acts of abusers by avoiding the situation all together. Though single-stall bathrooms may provide a place for these students to use the bathroom, they single out and alienate the students who use them. Since we have such a large population of transgender and non-binary students on the island, it is especially important that we create a safe and comfortable space for them. Educational institutions are always changing; our aim is for these changes to be positive.